Typical Goal Setting Should Be Forgotten (Unless You Like Wasting Time)

Focus on Controllable Variables Instead!

After coaching college soccer for 20 years, I can strongly say one thing about the way almost all typical goal-setting meetings go: They are a waste of time. They focus on outcomes.  So many teams get together in a room and plan out things like: the numbers of wins, where they would like to finish in the standings, how many goals they feel they need to score, the amount of corner kicks they can afford to give up, blah, blah, blah.  The problem with this old school goal-setting method is players can’t bring this info with them to the field–it’s all outcome based stuff.  An individual player cannot exclusively control outcome.  When athletes can’t control things, they tend to have trouble controlling their emotions.

All teams, coaches, and players have things that they want to achieve — getting into better shape, building successful mental and physical skills, making life-long friends, winning a championship, and so on.  For most players, this path starts by setting specific and actionable goals, creating a plan for practice, and identifying how they will achieve those goals.

“All players will succeed when they set daily, specific, practice goals.”

The most effective way to improve is with a skill or position specific focus firmly planted in the front of your mind.  This focuses play on variables that can be controlled during time on the field, not emotional, big picture, outcome goals that may end in frustration. 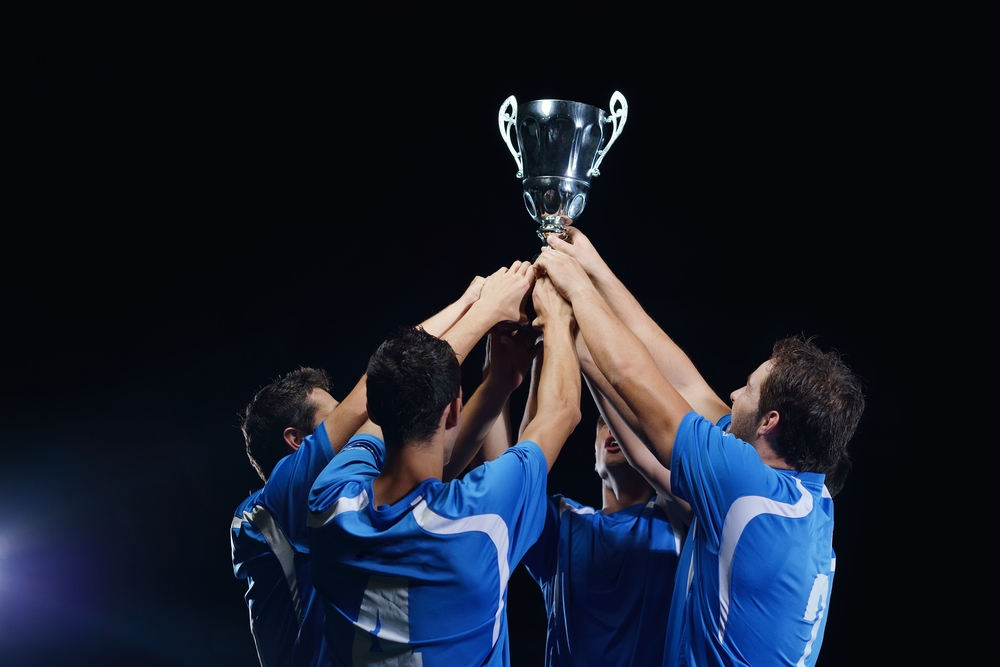 THE DIFFERENCE BETWEEN OUTCOME GOALS AND CONTROLLABLE VARIABLES

Outcome Goals are broad, for example: winning a game.  Controllable Variables are cumulative measurable skills and actions that add up to consistently effective play–collectively leading to outcome goal accomplishment.

Consider:  If you completely ignore outcome goals and focus only on daily, controllable variables and processes, would the team still produce results?  For example, as a soccer player if you ignored your goal to win a championship during practice and focused on settling your first touch away from pressure, would you still get results?  I know you would!  Using this methodology, the goal for practice would be to “settle touches away from pressure,” not “go win a championship.”  Teams achieve success with this focus because day to day technical and tactical components of the game are controllable and improvable.  In this way, they are also measurable. 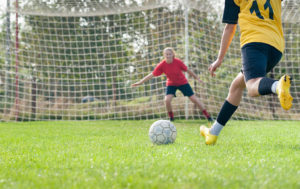 Here’s another example:  A player (Jenny) is playing in a big rival game.  The score is tied and the game is in the 80th minute.  Jenny’s teammate gets fouled in the box and a PK is called.  The coach tells Jenny she will take the PK.  Jenny now has a chance to win the game if she can just score.  As the ref places the ball on the spot Jenny hears somebody from the bench area yell “Score and we win this thing!”

In this pressure filled situation does it help the player to focus on the outcome goal of winning the game?  Of course not!  It adds stress in the form of tighter muscles, elevated heart rate, rapid breathing, etc.  Focusing on the outcome is emotional and doesn’t provide any effective actionable variables that can be controlled.  Now take Jenny, who has likely made a bazillion shots in her life in lots of scenarios.  If she focuses on the process of striking the ball cleanly she will be fine.  In this process, she takes a deep breath, she settles her feet, she sharpens her eyes to take aim, she takes another deep breath, she relaxes her neck, she strides up to the ball and, in one smooth motion, she strikes the ball with the inside of her foot, follows through and scores side net.  She can successfully repeat this process every time because she is just focusing on the details of quality shooting through variables she can control.  Her team will win because she focused on the controllable variables rather than winning the game.  Below we will talk about three more reasons to focus on controllable variables instead of outcome goals.

When you and your team are working toward a big goal, you are basically saying, “I’m not good enough right now, but I will be when I reach that goal.”

The problem with this mindset is you’re teaching yourself to always put happiness and the enjoyment of competing off until the next goal is achieved. “Once I reach my goal, then I’ll be happy. Once I achieve my goal, then I’ll be successful.”  Players who enjoy playing tend to produce quality play.  Unhappy players tend to find other things to do.

Simply thinking about an outcome goal puts a huge burden on your shoulders. Can you imagine if players took the field each practice only thinking about winning a conference championship by taking PKs? Just writing that sentence could easily make a player stress out.  Not to mention all the other parts of the game needed for our players and teams to be successful during the season to even get to that point?  Thinking about winning a championship in PKs all season would dominate our thinking by waiting for that one special game where players take PKs to win.  In focusing exclusively on just that narrow aspect, a player ignores many other aspects of the game he could be effectively practicing during the season.  Like, first touch, playing away from pressure, staying compact on defense, recovering in transition, attacking the front foot of the defender, etc.

Most teams and players focus heavily on outcomes all the time.  We put meetings on our calendars to set outcome goals assuming that once we do, our season will just go the way we drew it up and we’ll be good. We place unnecessary stress on ourselves to create a certain amount of shots, score a certain amount of goals, always switch the point of attack, or to play our ‘best game’.  It’s ideal for teams and players to keep things simple and reduce stress by focusing on the daily process and sticking to their controllables, rather than worrying about the big, life-changing goals.

When you focus on the process of improving controllable variables in practice instead of the outcome of performance, you can enjoy the present moment and improve at the same time 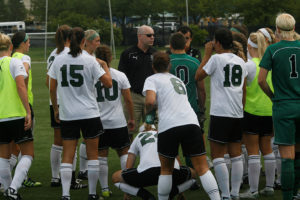 Outcome goals are at odds with progress.

You might think your end of season championship goal will keep you motivated over the course of the season, but that’s not usually true because it’s too big of a concept for players to hold in their heads each day.  I mean, how can any one player control winning a championship on some Wednesday evening practice?  It would be better for him to focus on anticipating passing options before receiving because that’s measurable and provides teaching moments.

Consider playing a big rival team that always uses low pressure, sit in defending tactics.  In order to beat this big rival, your team will have to solve this sitting in to defend and counter tactic.  Many teams would choose to work hard for weeks to break this specific kind of tactic, focusing only on this because of how good it will feel to get the upper hand against your rival.  In our story, let’s say your team does win this rival game.  Your goal was to beat your biggest rival and now that you have completed it, that goal is no longer there to motivate your team. When all your hard work is focused on a particular goal, what is left to push you forward after you achieve it?

This can create a “yo-yo effect” where players go back and forth from working on a goal to not working on one. This type of cycle makes it difficult to build upon your progress for the long-term.

SOLUTION: Let go of the need to focus on immediate results.

At client of mine was training on the field recently and was towards the end of her second-to-last set of serving crosses to a certain target area.  Make ten in a row and she was good.  When she hit one particular rep in that set, she felt a small twinge in her quad. It wasn’t terribly painful, or an injury really, just a sign of fatigue near the end of the session. For a minute or two, she thought about cranking out a few more crosses. Then, she reminded herself that her team needed her on the field for the rest of the season and decided to call it a day.

In a situation like the one above, an outcome based mentality will tell you to finish the pre-planned number of crosses to reach your goal no matter what. After all, if you set a goal and you don’t reach it, then you feel like a failure.

But with a controllable variables mentality, she had no trouble moving on.  She realizes that the risk of striking a few more crosses on a seriously fatigued quad could produce an injury and down time. Controllable variable based thinking is never about hitting a number, it’s about sticking to the process and not missing practices or training opportunities.

Logically, she knows if she never misses a crossing field session during the season, then she will become more accurate and powerful serving these balls during a game in the long-run. If she had crossed 10 more balls on a quad muscle that was acting up, she may have ended up pulling the quad and thus sitting out injured for a bit.  In which case, her overall performance would suffer.  And that’s why controllable variable are more valuable than outcome goals. Outcome goals are about results.  Controllable variables are about the long-term process. In the end, process always wins.

Outcome goals suggest you can control things over which you actually have no control.

You can’t predict the future.  But every time we set an outcome goal as a team, coaches, or players, we try our best to do just that. We try to plan out where we will be and when we will make it there. We try to predict how many games we will win in order to make the play-offs, even though we have no idea what circumstances or situations will arise along the way.

Remove the yo-yo of ‘did we win’ or ‘did we lose’ evaluation method of goal-setting.  It’s much more valuable to debrief after each practice and look at how the players handled the controllable variables that specific day.  At the end of every practice, I ask my clients to spend 5 minutes filling out a quick debriefing questionnaire.  Please try!  Here is the link for a quick, easy online way to do this:  Post Practice Debrief Form

Feedback through debriefing loops are important for building effective practice habits.  They allow players to keep track of many different things without feeling the pressure to predict what is going to happen with game results.  Forget about predicting the future by focusing on outcome goals and begin building a debriefing system that can signal when you need to make adjustments in your day to day work.

Fall in Love With Controllable Variables!

None of this is to say that outcome goals are useless. In fact far from it.  It’s just that their perspective needs to be evaluated.  They are the starting point of a discussion.  I’ve found outcome goals are good for planning your progress.  Building a focus on controllable variables and debriefing systems are good for actually making progress.  Outcome goals can provide direction and even motivate you forward in the short-term.  Eventually a well-designed system will always help the team succeed as it helps players to stay in the moment and focus on what they can control. Having a “controllable variables” system is what matters. Committing to the process is what makes the difference. 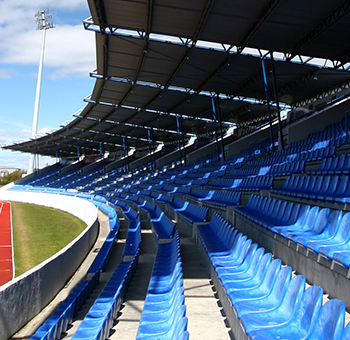 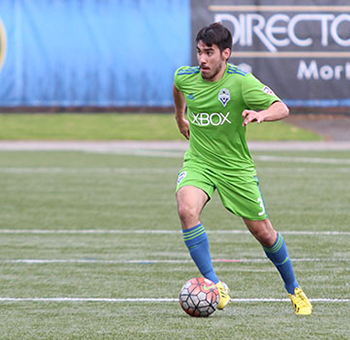