The combination of a structured mental and physical routine led to crafting a pair of perfect 10s on the Balance Beam for Evanni Roberson in her senior season as a gymnast at the University of Washington.  Evanni finished her senior season on the All Pac-12 1st Team (Beam and All-Around) and, among many other awards, was the first Husky to score a perfect ten on beam in program history.

Each gymnastics event poses obvious, as well as nuanced, challenges, physically and mentally.  In college gymnastics, the Balance Beam is either your last event or second to the last event of the meet.  Many gymnasts compete in multiple events, so predictably, they will bring some physical or mental fatigue with them to the beam.

Scoring a perfect ten on the beam is rare, 0.23% of all beam routines.  Earning two perfect 10s in one season is astonishing, .04% of all beam routines.  Over the last two years, only three college gymnasts in the NCAA have scored multiple 10s on the beam during the same season.  Evanni was one of those three athletes to earn two perfect 10s on beam in the same season!

During the 2019/20 gymnastics season, Evanni and I partnered to hone her beam work into a consistent and precise routine that she could perform anytime, anywhere, on any beam, in any circumstance with a predictable outcome.  Our end goal was her to own that beam.  I had been given information from her coaches about her previous seasons and how she had handled herself during meets.  I watched some film of her routines and thought about the areas in which her coaches felt she would benefit from improvement.  It became clear: Evanni could be an incredible beam worker, but her performances were not consistent.  The challenge was to create a consistent approach that worked for Ev every day in training and meets.  It was imperative she believed in this mental and physical routine under all circumstances, be it in practice, at an inter-squad meet, or against a nationally ranked opponent.

She and I evaluated her mental skills assessment results and came up with a plan to accomplish the desired goal.

The night I scored my first 10.0 on beam may have looked easy, but “crafting the perfect 10” was actually a long process that involved a ton of self-work. Coming into college, I never saw myself as someone who “cracked under pressure,” but the transition from club gymnastics turned out to be a more giant monster than I had initially thought. From a change in coaching to the stakes being higher than they ever, I had to adjust to a lot of things. With all of these new pressures coming from many different angles, I found myself getting caught up in doing my gymnastics in a way that I thought was what my coaches and teammates wanted to see. This approach resulted in me actually buckling under pressure because I was trying to do gymnastics that were not my own and for other people. Soon after this realization, I began to see a sports psychologist to help me tackle the tough nature that college gymnastics brings.

I started to realize that I needed to do gymnastics in a familiar and comfortable way to me. I needed to do gymnastics in the way I always had. I realized that my gymnastics was wholly disconnected from the feelings of my coaches and teammates. If I could let go of the fear of what they would do if I messed up and just do MY gymnastics, I would produce the result they wanted anyway. This way of thinking began to improve my game under pressure drastically.

The next step in the process was to control my nerves before I ever even mounted the beam. This included taking as much time as I needed before I mounted the beam. My sports psych reminded me that if I have 30 seconds to mount the beam then that time was mine. He said to me, “That 30 seconds doesn’t belong to the judges, your coaches, or your teammates, it belongs to you. People are on your time”. Having this mindset was just another way I was able to take control over my gymnastics. It became a mental skill of mine that as soon as I saluted, people were on my time, not theirs.

The next thing in my journey, and probably the most important, was creating my mental script that I used every time I competed. This is something that Elise (Ray-Statz; former UW Head Gymnastics Coach) taught me how to do as a freshman and stuck with me. This is something that I ALWAYS came back to in every situation. Before competing beam, you could always find me in the back, rehearsing dance/trick throughs using my mental script to prepare me for what I was about to do on the beam. This brings me to my next point; removing myself from the competition floor. This is another technique I used to gain control over a nerve-racking setting. By removing myself, it allowed me to key in fully to myself. It took my coaches, my trainers, my teammates, and the scores out of the equation. It left me purely to my own devices that I knew worked.

The first time I scored a 10, I was doing my own gymnastics how I knew how to do it, so it kind of just happened. It didn’t happen because I got lucky, but it happened because I practiced the mental skills that I knew worked. This was the ultimate testimony to myself and all the hard work I had put in. It was also a massive confidence booster. From then on out, every time I stepped on the beam, I expected to get a 10. Not because I was cocky, but because I knew I had put in the work, built my numbers, and I trained mentally every day with the intention of getting a 10. With that being said, this can be a fine line to walk. I always remembered that it was essential to go in with the expectation that I would score a 10, but it was even more important to remember not to get complacent. I knew that there was always more mental and physical work I could do and that my work was not done just because I had scored well previously. I knew that I could lose all the progress I had made twice as fast as I gained it, and having that mindset always kept me striving for more.

It is important to remember that not all my mental strategies stayed the same. I often had to tweak or change certain aspects of my mental strategy because they simply weren’t working anymore—one of these things being mental rehearsal.  Mental rehearsal used to be an everyday ritual for me before bed. This ritual quickly stopped working for me when I got to college as it became more anxiety-provoking than beneficial. At this point, it became unproductive, so it was a skill that I got rid of for a while, tweaked, and then eventually implemented back in small pieces at the end of my career.

Crafting the perfect 10 was a long process, but in the end, it was worth it. You will never regret investing time and energy into yourself. This is something I wish I had done sooner as a freshman or even senior in high school. I wish I would have invested time in myself to capitalize on the talent I knew I had. If I would have done this sooner, I think my college career would have looked a lot different.

For her senior year, Ev and I paired down her cue words to words that initiated a series of movements.  For example, instead of focusing on her flight series landing, we used cues to focus on her flight series’ earlier parts.  Instead of worrying about the dismount, we built in a cue to direct her attention to the dance portion before she started her dismount.  This particular cue involved body language to engage herself and the crowd, as well as showing off a little.  Additionally, we continued to emphasize the importance of her rhythmic counting to go along with her cues.

At practice, after something didn’t go as well as she would have liked, we worked on:

During meets, we used a couple of motivation techniques to narrow her attention.  First, I always asked her, “Whose beam is this?” She answered that the beam was hers.  Second, before she left the beam area to start her preparation, I had her verbally run through her whole routine with me using her cues.

Would this approach work for every beam worker?  Parts of it would, for sure!  Parts of her mental training routine were particular to Evanni and her strengths/needs.  The bottom line is to consistently perform to one’s best level, a well thought out, and repeatable mental routine is crucial.  The beam is 16.4 inches long, only 4 inches wide, and 49 inches off the floor.  It is unforgiving and offers zero wiggle room.  The only way to make that beam yours is to activate to your physically effective level, to have a calm and narrowly attuned mind, to trust your well-practiced routine, to be able to show your explosiveness in leaps, be smooth and strong in your flight series, to be creative and invested in your dance, and to know that you will stay in the moment for each movement.  As Evanni so perfectly said in one of our team huddles toward the end of the year, “Be where your feet are.”

Sport in a Pandemic: CRISIS OR OPPORTUNITY? Chapter 3 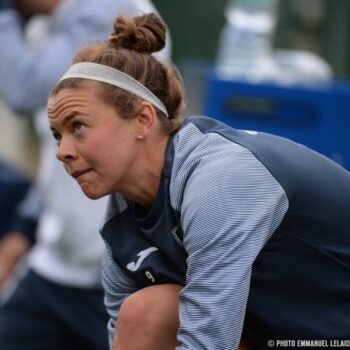 sport in a pandemic: Crisis or opportunity? Chapter 4 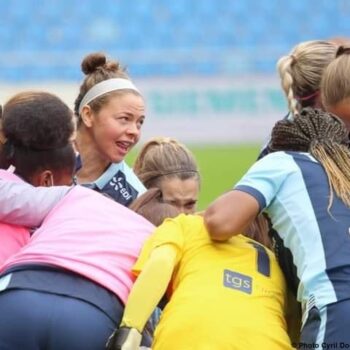